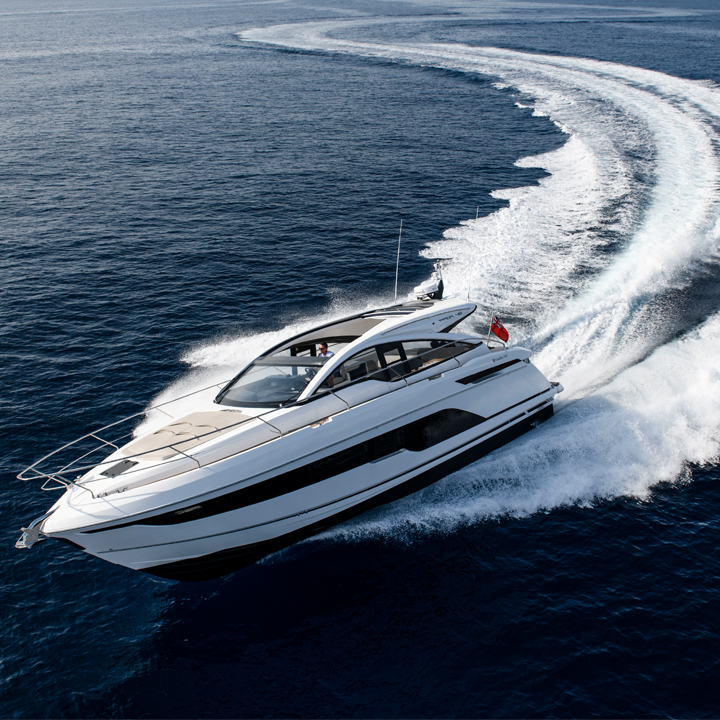 In addition to the stellar line-up of Fairline Yachts models, visitors to the Fairline booth will be able to explore a highly detailed and immersive virtual reality experience of the Targa 63 GTO, Squadron 64 and all new F/Line 33, which is due to launch next year.

Fairline’s star of the show is the Targa 43 OPEN, which made its worldwide debut at Cannes Yachting Festival in September. This innovative addition to the Targa range is the latest boat from the hugely successful partnership between celebrated Italian superyacht designer, Alberto Mancini, and the British boatyard. Following in the footsteps of its larger sister, the Targa 63 GTO, the Targa 43 OPEN was announced as the winner of the ‘Best Exterior Design’ Award in the 46-59 foot category at the prestigious World Yachts Trophies, and has been very well received by both customers and dealers alike.

The Targa 43 OPEN reimagines the popular Targa 43, which was originally launched in the late 1990s, to produce a boat with the innovative, versatile, light, bright and stylish feel that characterises the new generation of Fairline models. The luxurious two cabin cruiser features an instantly recognisable profile and hand-crafted details, making this a more than worthy successor to its predecessor whilst retaining the classic ‘made in Great Britain’ quality which the boatbuilder is known for. Powered by twin Volvo Penta IPS600 engines, the boat offers speeds of up to 34 knots.

The other Fairline models on show at Boot Düsseldorf 2018 include:
Squadron 53
Launched at Boot Düsseldorf 2017, the Squadron 53, also crafted with Alberto Mancini’s design expertise, has proven to be extremely popular. The yacht, based on Fairline’s well proven 53ft hull, features a new Mancini design from the deck upwards, showcasing Fairline’s new exterior styling.

This expansive cruiser features a spacious main deck from the cockpit to the lower helm, which in turn ensures a generous 6ft 4in headroom at the foot of the large double bed in the mid-master cabin, adding to an overall sense of space. From superior engineering and multiple layout options, to small details that delight, the Squadron 53 is the perfect choice for those who want their yacht their way.

Targa 48 GT
Combining the luxury of a spacious, sociable main deck with a well-appointed helm station with twin pilot seats, the Targa 48 GT enables you to share the thrill of discovery in comfort. Technologies come as standard, such as the electric, hard-top roof, coupled with panelled glazing. With one elegant sweep, the Targa 48 GT lets sunlight flood in, whilst its powerful IPS engines deliver an agile performance.

Over the last two years, Fairline Yachts has gone from strength to strength. The British boatbuilder has invested significantly in its design and production facilities, recently opening the Fairline Marine Park manufacturing facility in Hythe, Southampton and collaborating with Alberto Mancini to produce stand out new models that epitomise the new era of Fairline Yachts. The introduction of the new manufacturing facility is allowing Fairline to produce larger boats than ever before and strengthens the position of the company’s HQ in Oundle, while its design collaboration has led to multiple award wins. Fairline is currently building up to the launch of two exciting new boats in Spring 2019, the F//Line 33 and Squadron 64 – both of which have been designed by Alberto Mancini.

Fairline’s international network of dealers will be represented at Boot Dusseldorf on the Fairline stand, together with key personnel from Fairline’s design and manufacturing teams, to provide visitors with in-depth information about the company and its boats going into the 2019/2020 season.