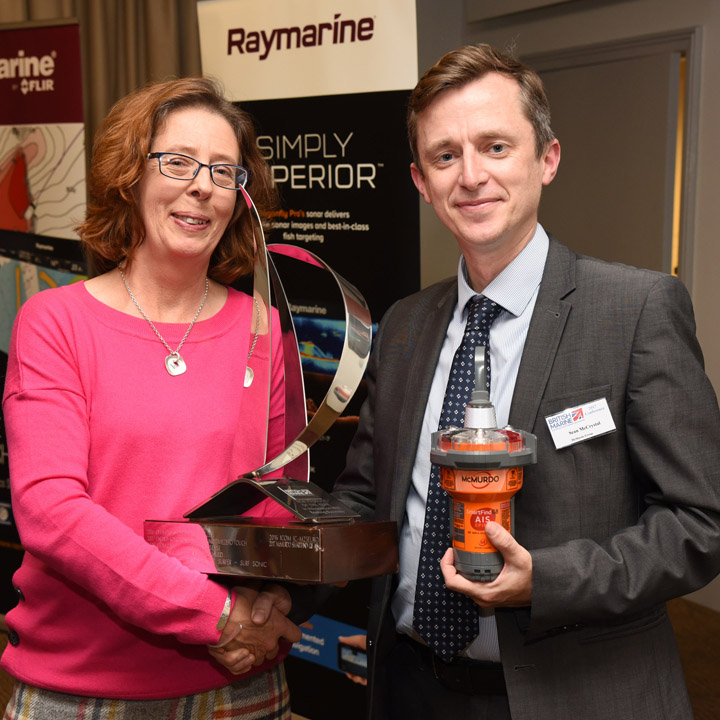 The conference, which was held at the Novotel in Southampton. presents the opportunity for the marine electronics industry to recognise and discuss new innovations, achievements and the future of the industry. Among five major awards, McMurdo’s SmartFind G8 AIS was selected as, “Maritime Product of the Year” by the whole community of BMEEA’s members.

A breakthrough innovation for the marine industry, with a combination of four leading technologies in one device, the McMurdo SmartFind G8 AIS is the world’s first EPIRB to include 406MHz, 121.5MHz, AIS and GNSS (better known as GPS) to accelerate search and rescue. The unique power of this new award winning beacon is in the flexibility and additional tracking capabilities long demanded by maritime customers. This will further reduce rescue times by combining the global location power of 406MHz with the localised rescue capacities of AIS, first introduced to the world in McMurdo’s AIS MOB range.

McMurdo’s innovative beacon, is designed for long term exposure in harsh marine environments, no other EPIRB has the range of frequencies to increase the speed or accuracy of the alert detection and recovery process. As well as precision technology, the inclusion of AIS in EPIRBs offers additional benefits. Over 80% of EPIRB activations are accidents,  to combat this the SmartFind G8 AIS features accidental activation prevention button tabs, additional drop protection, accidental activation prevention carry bracket, multiple self-tests to ensure the unit is viable and an internal hands-free carry strap.

Chris Loizou, Chief Business Development Officer at Orolia – parent company of McMurdo – says, “McMurdo’s Maritime team have pushed to set higher standards in durability and accuracy, to accelerate rescue. We are incredibly proud of what we have achieved and what the G8 AIS will offer our customers in terms of life saving improvements.”

Orolia’s McMurdo brand is the world leader in emergency readiness and response, and offers a growing portfolio of solutions, from voyage data recorders, distress beacons and satellite ground infrastructure, mission control centers and rescue coordination centers supporting the Cospas Sarsat search and rescue ecosystem. Half of the world’s MEOSAR satellite ground infrastructure has been installed by McMurdo, and the brand is responsible for the manufacture of 25% of the world’s 500,000 registered 406 MHz emergency beacons.